Billy’s Wish and the Ben Kinsella Trust are both charities set up by the families of young men, who were both the innocent victims of knife crime. Both families have a shared mission: to educate young people about the dangers of knife crime and how to keep themselves and others safe. In November 2012, one of the first events Billy’s family organised to raise awareness of knife crime in Billy’s memory, was to go to this exhibition. Everyone who went was affected by this very powerful experience – we believe it will also make a lasting impression on the schools that will visit. 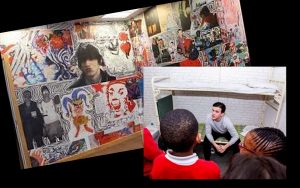 The exhibition itself is best described in the words of the Ben Kinsella Trust:
“Our main activity is the Ben Kinsella choices and Consequences Exhibitions are based in Finsbury Library in Islington, North London and in the National Justice Museum in Nottingham. These exhibition spaces are used to deliver anti-knife crime workshops aimed at young people aged between 10-16.
The workshops, each for up to 30 young people, are unique as they give young people an opportunity to learn about the dangers of knife crime and the emotions associated with living the experience in a safe space. We know all young people learn differently, so we have combined role play, video testimony featuring real life stories, quizzes and surveys to keep young people engaged. During workshops, young people move through 5 different themed rooms, guided by trained facilitators and actors who provide age-appropriate guidance, interaction and content.”