Family and friends of Scott Stone, a young man murdered in Welwyn Garden City, raised a staggering £2000 for Billy’s Wish, by spending a sunny Saturday touring part of the county on decorated bicycles, with men in drag and women in shorts!

The brainchild of Stevenage man Jacob Sizeland, the 25 participants set off from The Cowper Arms, Digswell, on Saturday morning. Riding across 15 miles of countryside through areas such as Tewin, Burnham Green, Datchworth, Woolmer Green, Mardley Hill, Welwyn and into Welwyn Garden City, the team successfully completed the challenge, visiting 16 pubs en route for refreshments on such a hot day and evening!

The tour was in memory of Scott who had a great sense of fun, so to continue his love of dressing up in this celebration of his life, all the men dressed as women and the women dressed as men.

Scott, 26, a charity worker, was stabbed in a stairwell of a block of flats in WGC in March 2014. His murderer Paul Dillon was gaoled for 22 years in July of that year. 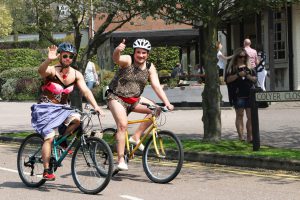